Business networking starts at 11:30 am. 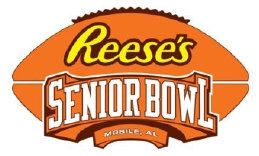 Jim Nagy took over as executive director of the Senior Bowl in June 2018 after spending 18 years in the National Football League. In his time in the NFL, Nagy worked as an area scout in the West, Midwest, and Southeast regions, as well as in a national scouting capacity for four years with the Kansas City Chiefs. He was a part of six Super Bowl teams and four Lombardi Trophy winning clubs (Green Bay Packers XXXI, New England Patriots XXXVIII and XXXIX and Seattle Seahawks XLVIII). Prior to his time in the NFL, Nagy worked for a sports agency in New York City representing NFL players and had various jobs in the media, including a consultant role on the NFL Today pregame show on CBS and writing his own football column in The Sporting News magazine. He graduated from the University of Michigan and his family has resided in Mobile, Ala., since 2007.